Stocks in the U.S. fell again on Monday, dragging the Dow Jones Industrial Average into bear-market territory—since hitting a peak early this year, it has now fallen more than twenty per cent. The Federal Reserve’s determination to stamp out inflation by raising interest rates is spooking investors, and so is the precipitous decline of the British pound in foreign-exchange markets. On Monday, a senior Federal Reserve official, Raphael Bostic, took the rare step of criticizing a foreign ally, saying the British government’s new package of tax cuts, which sparked the sell-off in the pound, “has really increased uncertainty.”

Spare a thought, if you will, for patriotic Brits. Having just buried Queen Elizabeth II, their last remaining link to a time when their schoolbook maps showed great swaths of the earth’s surface colored imperial red, they now face a humiliating currency crisis. In Asian trading early on Monday, the pound sterling hit an all-time low of $1.035 against the U.S. dollar. When trading shifted to Europe, the battered currency rebounded a bit amid speculation that the Bank of England would announce an emergency interest-rate hike to strengthen the pound. On Monday afternoon, the currency’s slump resumed after the Bank of England announced no rate increase but said it may enact one at its next policy meeting, which isn’t until November.

This statement didn’t impress the global market, which has been dumping British assets since Friday, when the new Conservative government of Liz Truss unveiled a sweeping set of tax cuts to be funded by additional borrowing. This costly stimulus package came on top of a previously announced energy-price bailout of households and businesses, which itself came on top of the necessary but costly efforts that the previous government, under Boris Johnson, took to shield the British economy from COVID. It also came at a time when the U.K.’s inflation rate is running at close to ten per cent, and the Bank of England is struggling to bring it down.

The enormous tax cuts are heavily slanted toward the rich and will amount to close to two per cent of Britain’s G.D.P. Kwasi Kwarteng, the new Chancellor of the Exchequer, presented them as part of a broader effort to boost the underlying growth rate of the U.K. economy. Many independent commentators condemned them as crackpot economics. It’s “the biggest package of tax cuts in 50 years without even a semblance of an effort to make the public finance numbers add up,” Paul Johnson, the director of the nonpartisan, London-based Institute for Fiscal Studies, said. The most biting verdict came from Larry Summers, a former U.S. Treasury Secretary. “It makes me very sorry to say, but I think the U.K. is behaving a bit like an emerging market turning itself into a submerging market,” Summers told Bloomberg. If the Truss government sticks to its new policy, the value of the pound could drop to less than a dollar, he added.

I don’t always agree with Summers, but in this case it’s hard to argue with him. One of the characteristics of emerging-market economies is that investors tend to be skeptical of their public finances and demand additional compensation for holding their government’s debt. That’s what is happening to U.K. bonds. On an average trading day, bond yields may change by two- or three-hundredths of a percentage point. Since Friday, the yield on ten-year British bonds has jumped by far more than that: from 3.46 per cent to 4.28 per cent. “It’s effectively the market saying, A, we don’t believe in trickle-down economics and that growth is going to miraculously occur,” Paul Donovan, UBS Global Wealth Management’s chief economist, told the Wall Street Journal. “And B, you see that magic money tree you just planted—we’re taking a chainsaw to it.”

Another characteristic of emerging-market economies is that their currencies sometimes fall even when interest rates are raised. This is also happening to the U.K. Last week, the Bank of England raised its policy rate for the seventh time in a year, to 2.25 per cent, but that didn’t prevent the subsequent slump in the pound, which has left the Bank’s head, Andrew Bailey, in a tight spot. The fall in sterling makes Britain’s imports more expensive and increases inflation. This puts pressure on the Bank of England to raise rates to ease inflation: in its statement on Monday, it said that it “will not hesitate to change interest rates by as much as needed to return inflation to the 2% target.” At the same time, the Bank of England said last week that the British economy has already fallen into a recession. Raising interest rates further would likely make the slump deeper and longer. The British people would suffer.

In other words, thanks to Truss and Kwarteng, Britain finds itself in another fine economic mess, one that some commentators are even comparing with that of the nineteen-seventies, when high inflation and pressure on the pound forced Jim Callaghan’s Labour government to go, cap in hand, to the International Monetary Fund for a bailout. To help fund its fiscal deficit and trade deficits, the country depends on the confidence of overseas investors in British assets. If their willingness to buy British debt evaporates, the decline in the pound could snowball further, bringing with it the risk of a major financial crisis—or, more likely, a drastic intervention by the Bank of England.

The tragedy is that all this is unnecessary. Although Britain has been through many tribulations in recent years, it is the world’s sixth-largest economy, it has a stable political system, and London is one of the world’s biggest financial centers. If its government were even reasonably competent, the risk of a financial blowup would be minimal. Unfortunately, that basic civic requirement isn’t being met.

In the past six years, the Conservative Party has jettisoned economic skepticism, and embraced wishful thinking and self-sabotage. Following the Brexit vote of 2016, it acceded to the claim that leaving the European Union, raising trade barriers to Britain’s largest market, and preventing eager European workers from crossing the English Channel and taking jobs that employers were struggling to fill would somehow help the economy. Now, under Truss and Kwarteng, a new Tory government has embraced a warmed-up version of Reaganomics, asserting that deregulation and tax cuts for the rich will raise Britain’s medium-term growth rate to 2.5 per cent. The independent Office for Budget Responsibility estimates a much slower rate of 1.75 per cent. Such a big increase—almost fifty per cent—seems unlikely.

The government didn’t subject its tax package to inspection by the O.B.R., which George Osborne, a previous Conservative Chancellor, set up to provide some outside scrutiny of the public finances. Before Kwarteng made his announcement last week, the O.B.R. offered to gin up a new economic forecast that incorporated the proposed tax cuts. The government said no. This was the tipoff that Trussonomics was in ascendance—and the financial markets noticed it.

On Monday, Kwarteng, who has a Ph.D. in economic history from Cambridge, sought to repair things by saying he would unveil a comprehensive medium-term strategy, complete with a new forecast from the O.B.R., on November 23rd. But that’s nearly two months away, which is an eternity in the financial markets. Well before then, something may give. ♦

New job alert: Over 250 companies hiring in Montreal this October

Tue Sep 27 , 2022
Fall is all about the harvest and the transition of things that are past their prime. Maybe that goes for your job as well? If that’s the case and you’re looking to move on to something else, a different career might be in the cards for October. Hundreds of jobs […] 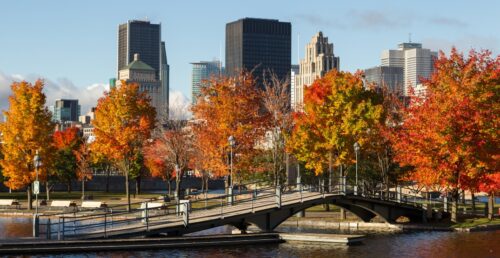