In a statement, the MOEA said Wang, who departed for Japan on Aug. 28 before returning home Saturday, witnessed the signing of a memorandum of understanding (MOU) by the government’s Taiwan-Japan Industrial Collaboration Promotion Office (TJPO) and Kumamoto Prefecture on a semiconductor supply chain partnership.

In addition to semiconductor supply chain cooperation, the TJPO and Kumamoto Prefecture will also team up in cross-field innovation development, the MOEA said.

The TJPO was set up by the ministry in March 2021 with the aim of accelerating the pace of industrial cooperation between Taipei and Tokyo.

Japan and Taiwan have since strengthened their cooperation in semiconductor development, the MOEA said.

Japanese semiconductor production material and equipment suppliers have been keen to invest in Taiwan, the ministry added, citing a joint plan by Sumco Corp., the second largest silicon wafer maker in the world, and the Taiwanese conglomerate Formosa Plastics Group.

The two companies are investing NT$28.2 billion (US$92.45 billion) to build a 12-inch silicon wafer plant in Mailiao, Yunlin County and production is scheduled to start in 2024.

The MOEA also noted a joint project with Taiwan Semiconductor Manufacturing Co. (TSMC) and a couple of Japanese companies to build a fab with mass production scheduled to start in 2024, rolling out specialty chips using TSMC’s mature 22 nm and 28 nm technologies.

Taiwan has taken a lead over its peers in developing high-end semiconductor technologies and if Japan’s semiconductor production material and equipment suppliers continue to engage in cooperation, the two countries are expected to bolster their competitive edge in the global market, Wang said in the statement.

When asked about the shortage of talent in Taiwan by these Japanese enterprises, the ministry said Wang promised to expand talent exchanges and training between Taiwan and Japan to make ensure the semiconductor supply chain is more resilient.

Taiwan has been good at IC design and electronics hardware and software development with respect to intellectual property rights, and has also been able to respond promptly to fast-changing markets, and these strengths have allowed the country to roll out critical components for EV use, Wang said.

Taiwan and Japan can aim for a larger share of the global smart EV market through cooperation in automotive electronics, smart car cabins and 5G and the Internet of Vehicles connections, she added.

The economics minister also set her sights on tremendous business opportunities in carbon reductions with Taiwan’s goal to reach net-zero emissions by 2050, the ministry said.

During her trip to Japan, Wang also explored the use of hydrogen to generate power in a bid to lower thermal power generation and cut carbon emissions, the MOEA said.

Sun Sep 4 , 2022
Copper prices are likely to continue their decline and fall another 11%, according to Fairlead Strategies’ Katie Stockton. That would be a good sign for lower inflation, but a bad omen for the economy as copper is seen as a barometer of economic activity. “During severe economic recessions, copper and […] 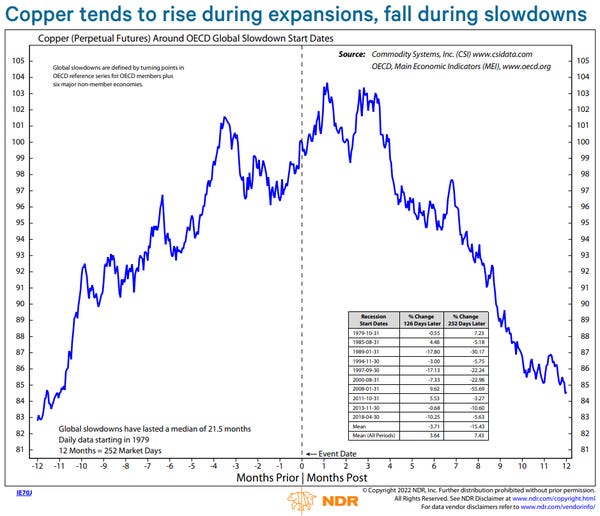